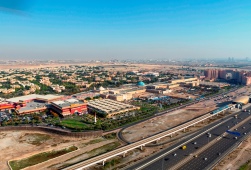 Nakheel is gearing up for thousands of extra visitors to Ibn Battuta Mall this weekend as tourists flock to Dubai for spring break and New Year celebrations.

Ibn Battuta Mall has seen an increase in visitors over the last 10 days, partly due to an influx of tourists from Saudi Arabia, who have travelled to Dubai for the spring break, and from Iran, who are here for Norooz (New Year).

Omar Khoory, Director, Nakheel Retail, said: “Ibn Battuta Mall has welcomed around 200,000 people per weekend since the Saudi Arabian spring break began earlier this month, compared to an average 180,000.  This weekend is likely to be even busier, with the start of the UAE spring break adding to the crowds.”

Nakheel is laying on a range of exclusive, live entertainment at Ibn Battuta this weekend and next, including daily live performances of the Chuck &Friends stage show, produced by American entertainment and dining firm, Chuck E Cheese.  Shows are on Thursday, Friday and Saturday at Ibn Battuta’s China Court, at 5.15pm, 6.30pm, 7.45pm and 9pm.  Live roaming acts will also weave their way through the 1.3 kilometre long mall.

Ibn Battuta Mall is the world’s largest themed shopping mall, designed to highlight the travels of renowned 14th century Arabian explorer, Ibn Battuta. The mall has six individually-designed zones named after and featuring architecture reflecting the most influential places he visited.  There are currently has nearly 300 shops, 50 restaurants, a 21-screen cinema and over 4,500 parking spaces, with more stores, eateries and facilities coming soon.