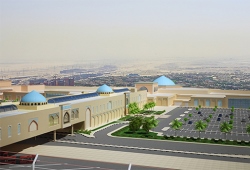 Nakheel today announced the tender for the expansion of Ibn Battuta Mall: a new, 28,000 square metre retail hub that will bring another 150 shops to the existing Ibn Battuta complex.

Spread over two floors, with 17,000 sqm of leasable space, the Ibn Battuta expansion will be directly linked to the existing mall and within a few metres of Ibn Battuta Metro station.

Set on a 521,000 square metre site, with a current built up area of 114,000 sqm, Ibn Battuta Mall is the world’s largest themed shopping mall. Themed around the travels of renowned 14th century Arabian explorer, Ibn Battuta, the mall has six individually-designed zones named after and featuring architecture to reflect the most influential places he visited.

Ibn Battuta currently has more than 270 shops, 50 restaurants, a 21-screen cinema and over 4,500 parking spaces.

The Ibn Battuta expansion is one of several projects in Nakheel’s retail expansion programme.  The developer is doubling the size of Dragon Mart, with the new, 177,000 sqm phase 2 due for completion in 2014. Other Nakheel retail projects underway or in the pipeline include Nakheel Mall and The Pointe on Palm Jumeirah, and community malls at Jumeirah Park and Discovery Gardens.