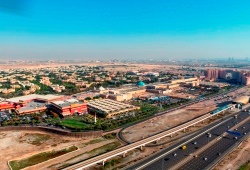 Nakheel has unveiled a range of new retail, residential and leisure developments for Dubai – with a combined built up area of over 23 million square feet – at Deira Islands, Dragon Mart and Ibn Battuta Mall.

The projects – endorsed by His Highness Sheikh Mohammed bin Rashid Al Maktoum, Vice President and Prime Minister of the UAE and Ruler of Dubai – will bring a host of additional, world-class facilities for shopping, living, business and tourism to Dubai, in line with the Government’s 2021 vision.

The new projects are:

Enter the new Dragon City
Dragon Mart – already the largest Chinese trading hub outside mainland China – is to be transformed into a giant retail, residential and leisure destination, called Dragon City, with a new, 6.5 million sq ft extension.
The expansion includes a 2.2 million sq ft retail component with nearly 1.3 million sq ft of leasable space including a showroom-style area for events and exhibitions, as well as an integral car park with over 6,200 spaces.
The new Dragon Mart extension also has a two-tower residential component with 1,120 one and two bedroom apartments, and a separate, 250-room hotel.
This new expansion project complements the existing, 2.95 million sq ft Dragon Mart extension which includes a mall, car park and hotel.  Dragon City will eventually span 11 million sq ft.

More to explore at Ibn Battuta Mall
Nakheel’s Ibn Battuta Mall – the largest themed shopping mall in the world – is to undergo an extension spanning 4.7 million sq ft.  The new complex will feature a one million sq ft retail component with 766,000 sq ft of leasable retail space; a new multi-storey car park for 7,000 vehicles and a four-star hotel with around 370 rooms.
The centrepiece of the extension is a 300,000 sq ft courtyard, featuring extensive green landscaping and a retractable glass roof for year-round shopping and dining.
The new extension announced today is in addition to Ibn Battuta Mall’s Phase 2 complex, currently under construction and due to open this year, and will bring the total size of Ibn Battuta to more than seven million sq ft

The complex includes Deira Mall, a new destination development designed to symbolise the modern city of Dubai while reflecting its past, present and future.  Deira Mall includes 2.9 million sq ft of leasable space and a car park for more than 8,400 vehicles. The mall will be surrounded by the 16-tower Deira Islands Towers community, comprising over 2,400 apartments and townhouses spread over four clusters.  The towers will be built atop four podium retail developments with 670,000 sq ft of leasable space.

Integral to the Deira Islands Towers project is Deira Islands Boulevard, a 400,000 sq ft walkable shopping and dining promenade connecting the residences, mall and parks that make up the development.  The Boulevard will have around 120 outlets.