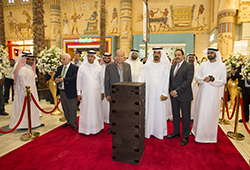 The extension adds 60 new shops, restaurants, cafes and services to the mall – which currently welcomes 20 million visitors a year – and brings the total number of outlets to almost 400.  Among the new stores are Decathlon, United Furniture, Marks & Spencer, Under Armour, Iconic, Superdry, Jashanmal and Paul, as well as expansions to Homes R Us, which now spans two levels, and Paris Gallery.

The expansion is the springboard for a series of subsequent extensions that will transform the existing Ibn Battuta complex into a giant retail, entertainment and leisure destination spanning seven million sq ft.

A two-storey link connecting the mall to Ibn Battuta Metro Station is also due to open in the next few weeks, bringing another 90 outlets including a 24 hour food court, and Ibn Battuta’s first hotel – a 372-room Premier Inn – is scheduled to open later this year.  These will be followed by another 4.7 million sq ft development – to be constructed over the next three to five – comprising a mall with a glass-covered courtyard, a new cinema complex, a multi-storey car park and another hotel.

Nakheel Chairman Ali Rashid Lootah said: “Today’s opening is a significant milestone for Ibn Battuta Mall and Nakheel’s retail business, which continues to grow in line with our company strategy. This extension, coupled with the soon-to-open Metro link and subsequent expansions at Ibn Battuta, cements the mall’s position as one of Dubai’s biggest, most popular destinations, and reinforces Nakheel’s position as a major force within the Dubai retail sector.”

Set on a 5.6 million sq ft site, the 1.2 km long Ibn Battuta Mall is themed around the travels of renowned 14th century Arabian explorer, Ibn Battuta. The mall has six individually-designed zones named after and featuring architecture to reflect the most influential places he visited.  The extension follows the same architectural theme as the original mall.